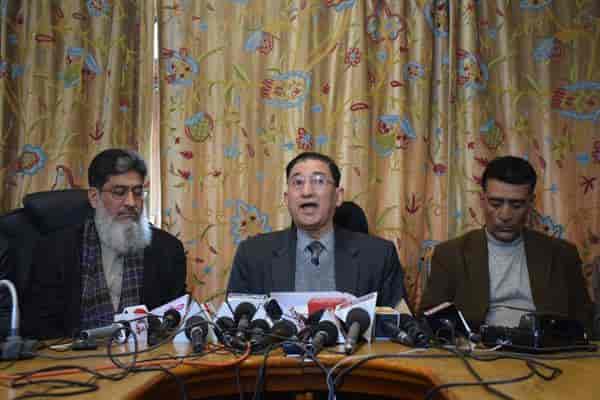 “This press conference was called to register our protest at the repeated harassment of leaders, institutions and organisations in Kashmir,” they said, adding that “socio-religious institutions are a part of our history and culture.

Their role in upliftment of the poor, supporting orphans and imparting education and Islamic values to a majority of the population is unparalleled.”

“Any attempt to weaken these institutions and their leaders by making motivated accusations is being seen as direct interference in our religious affairs. We are of the firm conviction that under present abnormal conditions prevailing in the State, the Government shall act more cordially to avoid harassment to Kashmiris. This must also be taken note of that Dr. Mirwaiz Umer Farooq is the religious head of the State,” the trade bodies said.

They further added that besides being Mirwaiz of J&K this family is connected for centuries with the people of Kashmir. “They have remained torch bearers providing platform for imparting education, inculcating of spiritual and moral values besides social services. Not only do the Muslims of Kashmir but even the Kashmiri Pandits and Sikhs have high esteem towards this dynasty since centuries,” they added.

This time also Anjuman Auqaf Jamia Masjid under his patronage is continuing such activities, the Valley traders said.

In unison, the business community of Kashmir condemned the ‘brazen attempts’ at politicization of the situation in Kashmir.

“Throughout the country, our community is being targeted economically and socially. There are cases of murderous physical assaults. A section of the social and electronic media is being used to tarnish our image. A number of innocent people and leaders have been jailed and are being intimidated. The Valley appears to be under siege. Our socio-religious institutions are being interfered with,” the trade bodies said.

There seems to be a concerted attempt to cause disruptions and provoke the peace loving population. The Government should take immediate corrective measures for defusing the situation, they added. (KNS)