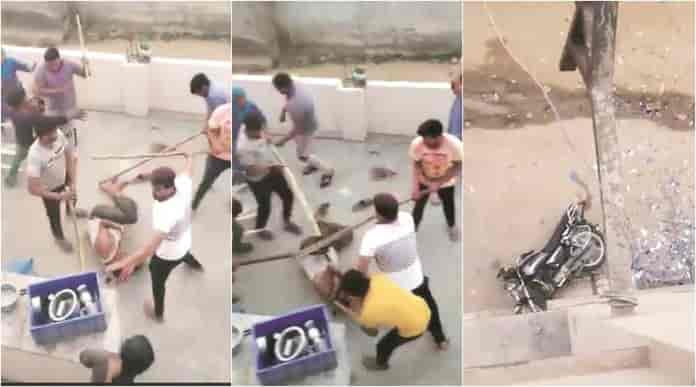 Members of a Muslim family in Gurgaon’s Dhamaspur village and their guests were beaten with sticks and rods,  by 20-25 men, who barged into their home and attacked them on Holi evening.

According to The Indian Express the incident took place after some of the accused allegedly approached the boys from the family, who were playing cricket outside, and demanded that they “go to Pakistan and play”.

One person was arrested for the crime late Friday night.

According to the victim the trouble started when one of the victims was playing cricket with some others in a vacant plot near the house.

“Two unknown men came on a bike and said, ‘What are you doing here? Go to Pakistan and play’. They began fighting and when my uncle Sajid intervened, the boy sitting at the back of the bike slapped him and said, ‘You wait, we will show you’,” he alleged in the police complaint, adding that 10 minutes later, they saw six boys on two bikes and several men on foot approaching their home, armed with “bhalas” (spears), “lathis” (sticks) and “talwars” (swords).

“On seeing them, we ran into the house, and they all began demanding that the men come out or they will kill us. When we did not go out, they forced their way into the house and started beating us up,” he alleged.

In the minutes that followed, captured on a family member’s phone, the mob allegedly beat up the men, pushed the children and fled with the valuables.

A case has been registered under IPC sections 148 (rioting), 149 (unlawful assembly), 307 (attempt to murder), 323 (voluntarily causing hurt), 427 (mischief causing damage to the amount of fifty rupees), 452 (house trespass), and 506 (criminal intimidation). “Some of the accused have been identified. We are conducting raids and expect to make arrests soon,” inspector Surender Kumar, SHO of Bhondsi police station.

Sameena said: “I was in the kitchen making food when I heard a racket outside. By the time I went out, the men had barged into our house and started beating people up. I begged them to leave us, but they paid no heed.” “They broke the windows, our cars and took away valuables, including a pair of gold earrings, a gold chain and Rs 25,000 I had kept in the house,” she was quoting as saying by The Indian Express.