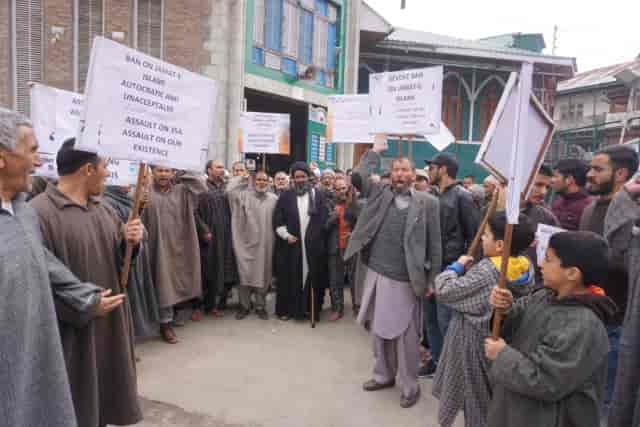 The organization also condemned the ban on Jama’at-e-Islami, raids on the leadership and assault on Article 35A.

Spokesperson, Anjuman Shari Shian said that party president Aga Syed Hasan Almosvi Alsafvi was placed under house arrest and was  barred to offer Friday congregational prayers. He condemned the action of authorities and said such tactics are not going to break the resolve of freedom loving leaders.

In a statement, spokesperson termed the ban on JeI, arrest of hundreds of its leaders and cadres, assault on the state’s hereditary state subject law, slapping of PSA on leaders as an attempt to silence the people.

He said the aim of these moves was to weaken the people’s movement and to intimidate leadership and people of Kashmir into submission to give up striving for the resolution of the Kashmir dispute.

He said that people and leadership are engaged in a political and human struggle for Kashmir resolution as per the internationally accepted and democratic principle of self-determination.

“Authoritarianism is no solution to issues and will not yield the results that GoI wants as has been proved in the last three decades. Talks and dialogue are the most peaceful and democratic manner to address issues and bring peace in the subcontinent,” he said.