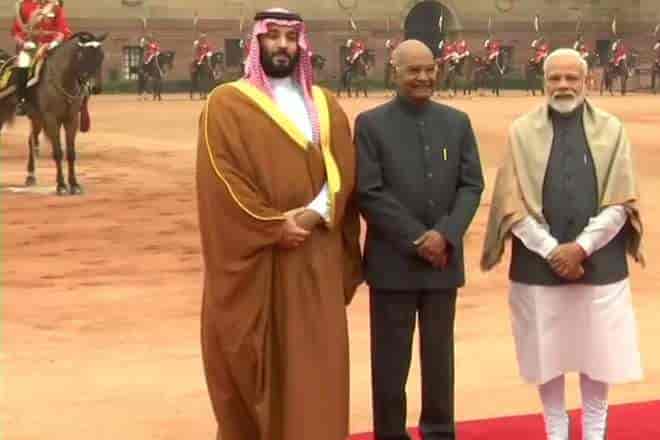 Terrorism and extremism are “common concerns” and Saudi Arabia will extend all cooperation to India and other neighbouring countries to deal with them, Saudi Crown Prince Mohammed Bin Salman said on Wednesday after holding “extensive and successful” talks with Prime Minister Narendra Modi.

The talks took place a day after the influential Arab leader concluded a high profile visit to Islamabad, and in the backdrop of India’s escalating tension with Pakistan following the Pulwama attack in which 40 CRPF personnel were killed by a Jaish-e-Mohammad suicide bomber.

In his media statement, Modi called the attack a “cruel symbol” of the scourge of terrorism and sought punishment for the terrorists and their backers. The crown prince, however, did not mention the strike.

The two sides inked five pacts to expand cooperation in a range of areas, including trade and investment.

The crown prince, in his media statement, described terrorism and extremism as common concerns and said his country will extend support to India and other neighbouring countries to deal with the challenge.

“As far as terrorism and extremism are concerned — which are common concerns — I want to tell India that we will extend all cooperation to you — be it intelligence sharing…not only with India but also with the neighbouring countries,” he said.

“We will work together so that we can ensure a bright future for the generations to come,” he added.

In his address, Modi also called for a strong action plan to combat extremism so that powers spreading violence and terror cannot mislead the youth.

Modi said both sides agreed that stronger bilateral cooperation in areas such as counter terrorism, maritime security and cyber security will be beneficial for the two countries.

“Today, we held extensive and meaningful discussions on all subjects of our bilateral relations. We have decided to take our economic cooperation to new heights,” he said.

In order to facilitate institutional investment from Saudi Arabia in India’s economy, the two countries have agreed to establish a framework, the prime minister said.

“As a result of our meeting in Argentina two months ago, the essence of our strategic partnership has expanded in the areas of security, trade and investment,” he said.

“Your ‘Vision 2030’ and the economic reforms being done under your leadership are complementary to India’s major programmes such as ‘Make in India’ and ‘Start-Up India’,” Modi said.

It is time to turn energy relations into a strategic partnership, he said.

The crown prince arrived here on a less than 30-hour visit Tuesday night, a day after concluding his high-profile tour of Pakistan where he said dialogue was the only way to resolve “outstanding issues” between India and Pakistan.

In a special gesture, Modi received Salman at the airport here, signifying the importance India attaches to the visit by the leader of the Gulf nation.

In a joint statement, Pakistan and Saudi Arabia on Monday called for avoiding “politicisation” of the UN listing regime, at a time India is stepping up efforts to brand the Jaish-e-Mohammed terror group’s chief Masood Azhar a global terrorist.

The joint statement said the Saudi crown prince stressed that dialogue is the only way to ensure peace and stability in the region to resolve “outstanding issues” between India and Pakistan.

Saudi Arabia’s Minister of State for Foreign Affairs Adel al-Jubeir said in Islamabad that Riyadh will try to “de-escalate” tensions between India and Pakistan in the wake of the Pulwama attack.

After he was given a ceremonial welcome at the Rashtrapati Bhavan on Wednesday, the crown prince talked about historical linkages between the two countries and stressed on expanding the ties further.

He also talked about the contribution of lakhs of Indians in the overall development of Saudi Arabia.

According to the Ministry of External Affairs, the crown prince will leave New Delhi around 11.50 pm on Wednesday. (with inputs from PTI)