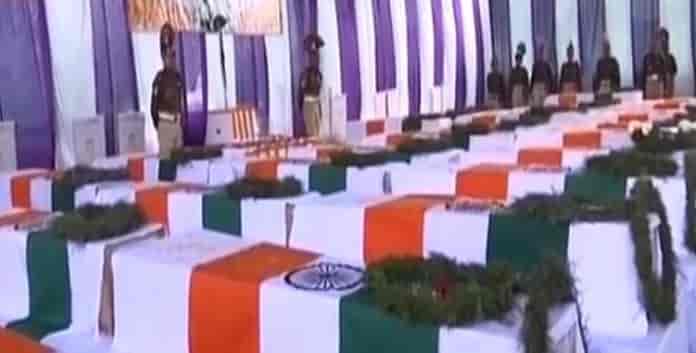 Home Minister Rajnath Singh on Friday arrived in Srinagar and paid homage to killed CRPF men in Pulwama Fidayeen attack. Singh, arrived at  Srinagar to pay homage to the CRPF troopers who were killed in a deadly fidayeen attack on Thursday in Lethpora area of Awantipora Pulwama in an IED blast.
Singh, Governor Satya Pal Malik, and other top security officers and civil officers were present here at Budgam where the Home Minister paid homage to them.
A total of 49 Central Reserve Police Force personnel were killed when a suicide bomber of the Jaish-e-Muhammad (JeM) outfit rammed an explosive-filled SUV into a CRPF bus in Lethpora area on the Srinagar-Jammu highway. (Inputs from KNS)