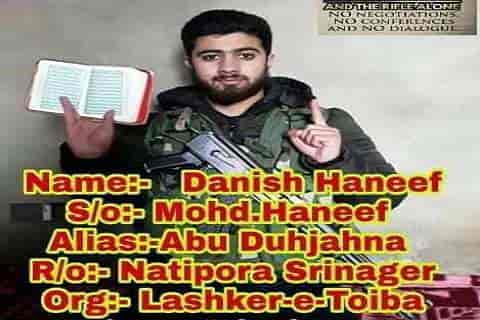 Srinagar: A picture of a 22-year-old youth from Natipora holding a gun has  surfaced on the social media.

As per reports the youth has been identified as Danish Haneef Wani a resident of Natipora, Srinagar.

According to reports Wani went missing soon after he left home for prayers in the nearby mosque on December 30.

However, a picture of Wani holding a gun and a copy of Qur’an in his hand surfaced on social media on Saturday.

According to the picture, Wani has joined Lashkar-e-Toiba militant group on January 8.