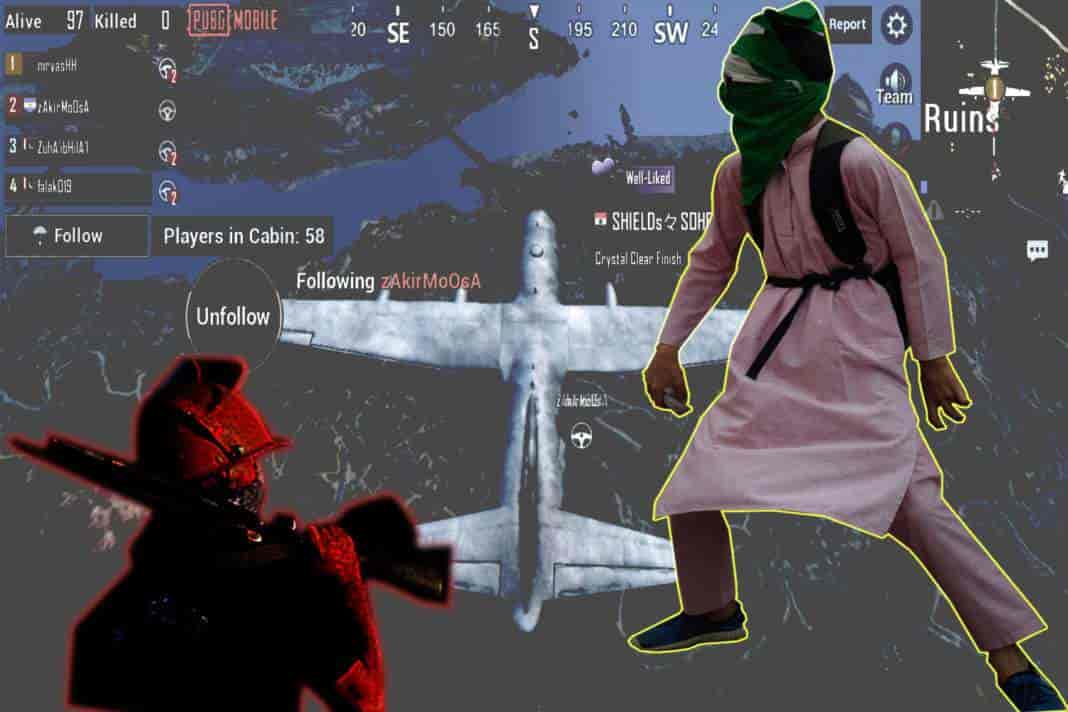 ‘zAkir MoOsA’ loaded his shotgun, an eye ran red — aiming to steal a ‘headshot’ — takes another drag from his cigarette, and said, “This is the shotgun; whenever I hold this, I remember when they hit pellets at me in Downtown [Srinagar].” Running through the Pochinki, an area in the gameplay, looking around anxiously, he whispered, “It [Pochinki] is like Nowhatta; halaat kharab rehte hai yaha (situations are violent here).”

As the state of Jammu and Kashmir flaps through a rough phase of political unrest; state going government-less, iconic IAS topper resigning citing civilian killings, and south been above boiling point  — though, the recipe for the primetime debates is same — but, the youth, Kashmir’s Gen-Z and millennials are fading away from the frontlines.

A far place away from the turmoil, the youth have found a shed in the nihilistic lap of PlayerUnknowns’ Battleground (PUBG). If you are a newb or have just got the internet, PUBG is an online survival game, wherein, you are being dropped on an island with your team (2 to 4) or single, depending on preference and your social stature — following Charles Darwin’s theory — the fittest survive, and wins the game.

PUBG: A way of life

Aqib*, 18-year-old, who goes by the name of “zAkir MoOsA” in PUBG, ‘inspired by a Kashmiri militant commander’, always goes with reflecting sunglasses, hanging inside a pheran. Early in the morning, zig-zagging through the falling snow, we reached a PUBG-playing hub, popular among the residents in the area.

“Look, I met this girl three days ago in the game,” and flaunts his new love interest in a multi-screen, while checking out the new wardrobe for his ‘avatar’ in the game. After a brief round of makeshifts, Aqib is ready to jump with a team of four; one of them, Zuhaib, is sitting by his side, while the other two are connected through Facebook, habited somewhere else.

His phone rang. Didi calling. Well, it doesn’t matter apparently. “I’m not the only one, you will find numerous players in Kashmir, who go by the name of their favorite militant,” said Aqib removing his goggle with one hand.

Aqib was hit by pellets in July 2018 and is blind in the right eye since then. “If the operation goes well, I might see again,” he adds. Learning from the accidental incident, he said that it was his mistake to hold the front with thin sunglasses, “Now, I have bought a thicker one. It is sorted.”

With hundred players on the battlefield, including his team, the players started looting the seemingly residential area. Yes, with proper sofa set, TV, fans — even carpet  — the blood-thirsty group of people roaming around to loot the remains. But, with all such fancy stuff, and scenic window view, why has everyone left their home? Where are they?

Soon, he got into an encounter, and his support was killed subsequently. He fought bravely — but didn’t last more than 26.7 minutes in the battlefield — and returned home without the eternal happiness — Chicken Dinner.

Young boys and girls are channelizing their rage and frustration in the game. The PUBG has neatly aligned itself with the Kashmir-conflict – even recently the game got a timely winter theme too.

When it is becoming a getaway from real-life in the Valley among the youth, for some like 20-year-old Irfan Syed, hailing from Pulwama, it remains just a timepass. From at least four hours to the maximum of human capability, Mr. Syed is passing a lot of time lately.

“Honestly, I don’t study. Even when I’m talking to you, I’m supposed to be studying for my exam. I don’t know about others, but I can’t study,” says Mr. Syed, naively accepting all the cons of the game.

But, the cravings of Chicken Dinner is luring; and walking hand in hand with self-realization, the phone gets on charging, and the guilt of having one more try — chasing one more ‘kill’ — gets you stuck to one more adrenaline pumped battle round.

Keeping a shooting-survival-game in the Valley away from the conflict is a utopian argument. From as symbolic as going with the flag of Pakistan in the game, to naming your avatar in the game inspired by foreign militants, like one of Naveed Jatt, the fire of armed-conflict in the Valley keeps the young boys heated up.

Aqib remembers one time of a random round of grouping, “Me, and my two friends were grouped with an Indian player,” and flaunting the publicity of his username’s real posture, he added, “He abused Musa, and Tehreek (freedom struggle) badly throughout the game.”

Though, treating the game like a game, Aqib and the companion went along with the game; six alive displayed the real-time bar. “We took him aside, and threw a grenade at him,” said Zuhaib, Aqib’s companion. “It is good to attack when it hurts the most. He was about to have a chicken dinner, but we had to do it; he abused Tehreek. He died.”

Here, as the game continues, the play area shrinks, forcing in-field players to collide with each other. Apparently, you cannot escape death. It is evident that the PUBG fever has taken over the Valley (there is a cafe in Srinagar based on its theme), several officials are appealing to slap a ban on it. Severe addiction cases have been reported in the hospitals, and Deputy Mayor’s signature over the letter to consider a ban over has hit the rock.

Youngsters are in no mood of hanging the shoes; amid chaos, pumping adrenaline, and spilling blood in the gameplay, PUBG highlights everything that is choked up in the subconscious mind of the societal structure.

*Names have been changed on subject’s request

Yashraj Sharma is a Features Writer at The Kashmir Walla.