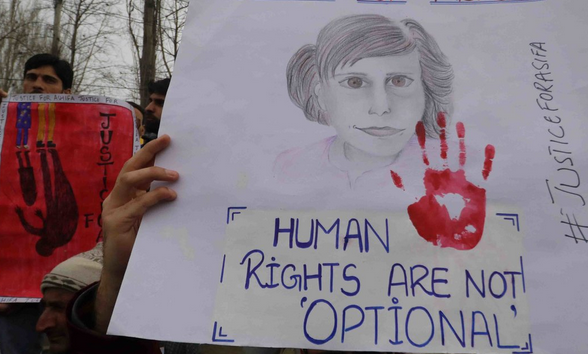 The daylight of 17 January 2018 screeched the entire country’s conscience when the body of the eight-year-old girl, belonging to the nomad Gujjar-Bakarwal community, was found in the forest area of Kathua. Lying there unnoticed for three days, according to the charge sheet filed by the Jammu and Kashmir police, she was abducted on 10 January – the group drugged her, repeatedly gang-raped her – and right before raping her for one last time on 14 January, the killer strangled her and bashed her head with a stone – to make sure she doesn’t survive to narrate her ordeal.

The brutality expressed in the horrifying charge sheet jolted the internet, and soon the people were on the streets demanding justice. ‘Heroic’ photos of the handful of lawyers, defending the nomad girl, surfaced online; led by two Bharatiya Janata Party’s leaders, communally inspired rallies were taken out on the streets defending the charged ones; lawyers based in Jammu tried to stop the Crime Branch from filing charges against the accused; primetime got its spaced covered.

As per the charge sheet, the incident “was to instill fear and dislodge the nomadic tribe from the forest areas of the Jammu province.” The nomad community has continuously been saying their life in Jammu division hasn’t been same in recent years, facing eviction and threats.

As it happened, the crime branch arrested Sanji Ram, the custodian of a temple where the child was allegedly confined, his son Vishal and his juvenile nephew, two special police officers Deepak Khajuria alias ‘Dipu’ and Surender Verma and friend Parvesh Kumar alias Mannu. All of them were named in the first charge sheet on 9 April. The district and sessions court framed charges of rape and murder against the seven accused in the case on 8 June.

ALSO READ: Rape of minor nomad girl: ‘If there is no justice, kill me with my daughter’

The crime branch had also arrested the Head Constable, Tilak Raj and Sub-Inspector, Anand Dutta, who allegedly took rupees 4 lakh from Mr. Ram and destroyed crucial evidence. Mr. Raj and Mr. Dutta have since been dismissed from the service.

The doctors who conducted a postmortem said that the girl was sexually assaulted and died of asphyxia. Later, it turned out that she was administered a cocktail of sedatives to make her incapable of resisting the sexual assault.

As reported by NDTV, Ahfadul Mujtaba, a senior officer of the Crime Branch said that they have produced 114 witnesses who deposed before the court. “There are a couple of witnesses who turned hostile, but during the cross-examination, the facts were brought before the court. The trial has been conducted every day and there is not a single day when an adjournment was sought,” said Mr. Mujtaba.

Meanwhile, the activist leading the campaign ‘Justice for Kathua Victim’, Talib Hussain got a couple of rape accusations against him. He was arrested from Samba district, Jammu, and was accused of raping a woman in Chamba forest area. Soon, the reports of torture and gruesome beating of Mr. Hussain in the custody surfaced, and his lawyer, Indira Jaising, tweeted “(Mr. Hussain) tortured in Samba police station while on police remand, skull broken, rushed to hospital in Samba.”

On a year down the line, the charged ones got arrested; the case got moved to Pathankot court; the overnight social media sensation and lead-lawyer of the nomad family, Deepika Rajawat, got dropped by the family as they felt that ‘she only took the case for publicity’ as she had appeared only twice in the court; two BJP leaders were told to resign after they carried rallies in favor of the accused; the nomad family is facing “social boycott”, and is living in Rasana village; eight-year-old girl, who mustn’t be named out of societal conscience, longs for justice.