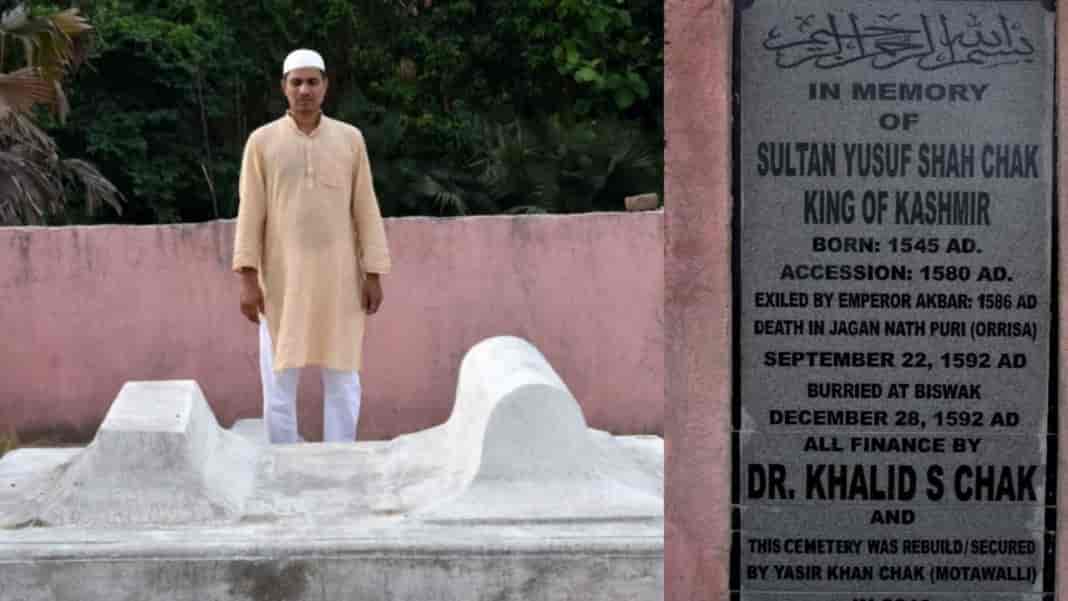 Yasir Rashid Khan, at the graveyard of Yusuf Shah Chak, who was Kashmir’s last King.

On a land, far away from the valley, 60 kilometres away from the capital of Bihar, a small village, Biswak has Kashmir’s last king, Yusuf Shah Chak buried. In the Nalanda District, the ‘forgotten’ graveyard now faces the threat of extinction, and is under continuous encroachment attempts.

The Kashmir Walla reached out to Yasir Rashid Khan, the mutawalli (caretaker) of the graveyard to get into the depth of the issue.

Chak was the last native ruler of Kashmir and after his exile the region was never again ruled by natives. Apart from being a ruler, he has been known in Kashmiri legends as the husband of Habba Khatoon, a Kashmiri poetess. Belonging to Pampore area of the Valley, she was named ‘Zoon’ (moon) by her parents.

In 1586, Mughal ruler, Akbar wanted to occupy Kashmir, and invited Chak to Delhi to negotiate. Following a treachery, Chak was taken in custody, and he never returned to Kashmir again. Going through the loss of love, Habba Khatoon left the palace and roamed around the Valley, writing and singing songs in Chak’s longing.

When Akbar exiled Chak in the then Bengal region; he kept him in Biswak area, and later when Chak agreed to merge with Akbar, he become the commander of his army. Tracing Chak’s roots to Kashmir’s Chak dynasty, that area was named after him as Kashmiri Chak Village.

Mr. Khan, 33-year-old, followed the footsteps of his ancestors, and has been taking care of the place since 2012. The native of Islampur, he lives with his mother in Khankah Mohalla, six kilometers from Biswak village. He says that he had been working like a crazy for more than six years to make sure that this significant tarikh (history) is preserved.

“People were grazing their cattle here. Dogs, and cats were roaming on the grave. I started from as basic as raising at least a boundary wall around it,” said Mr. Khan. Expressing the grievances, he told that he hasn’t left any stone unturned to make things better. “I wrote to numerous people, including Jammu and Kashmir, as well as Bihar government,” from mentioning names like of Late Mufti Sayeed, former chief ministers of Jammu and Kashmir like Mehbooba Mufti, Omar Abdullah, Farooq Abdullah, he continued, “I wrote them in registered post letters, and I have the receiving receipts too.”

The Khan family migrated from the Chak area, where the King was residing, during 1947 communal tensions, “even some of our family members were martyred in it, but our love for the homeland stayed,” and Mr. Khan claims to be the last surviving person from his family to take care of the grave.

In 1977, Mr. Khan’s grandfather hosted Sheikh Abdullah in Nalanda, where the former Chief Minister of Jammu and Kashmir came with entire crew, including Mohammad Yusuf Taing. Though, the meeting made to the news, and as a gift of gratitude, a road connecting the cemetery to the Biswak village was named after Mr. Abdullah.

Mr. Khan has a postgraduate degree in Health Management, and was managing district hospital in Patna, capital of Bihar when he read a news: Kashmiris demanding the bodies of Maqbool Bhat, Afzal Guru, and Yusuf Shah Chak, in around 2013. “I met people and started enquiring about (Yusuf Shah) Chak, but people resisted and told me, ‘kya karoge jaankar?’ (what can you do about it?),” but he continued, and visited the concerned Waqf board to learn about the history. In the following week, he resigned from his ‘well-established’ job, and started working to save this significant history.

From authorities in Bihar including Sub Divisional Magistrate, District Magistrate, Commissioner, Secretary to Chief Minister, Chief Secretary, and the then Chief Minister of Bihar itself, Mr. Khan knocked door to door to get official help to stop “illegal encroachment”, and only requesting them to preserve this “very important part of the history”.

Quoting ancient literature like Ain-e-Akbari, Baristani-e-shahid, and many more, he told that he organises annual Urs in Chak’s remembrance, “hoping that his historical significance survives.”

Thanking political leaders from Jammu and Kashmir for raising the issues of negligence of the graveyard, Mr. Khan said that, “today Bihar government authorities, including Nalanda’s DM, visited the cemetery and gave us assurance of taking actions accordingly.”

As per Mr. Khan, other than the anti-societal elements, it is also people’s unawareness about the significance of Chak’s role in Kashmir’s history, that made them do such activities, like grazing cattle, and throwing waste around.

Reacting to the requests by Kashmiri communities of taking back Chak ‘home’, he said, “it is not allowed in Islam to dig the body back,” and changing the tone swiftly, he urged, “if you have such love, attachment, and emotions for your king, start social welfare on his name, and preserve this place.”

“It is hurtful that people have forgotten the pious itself,” and thanking the media houses for the coverage and raising the issue, Mr. Khan said, “It is good to see that, let it be late, hope is there now.”

Expressing his wish to visit Kashmir once in his life, he hoped that Kashmiris will also appeal to protect it, and visit the cemetery sometime, “so that we can make it as good as Kashmir was during Yusuf Shah Chak.”