(Oh my Allah! I’m helpless, please save my Faizan,

Oh my Allah! please be humble on me and my condition,

Wani a resident of Dangerpora, Shopian, is lying on the operation bed, sporting a fresh mustache on his face. He got a bullet in his head near the gunfight site in Kapren area of Shopian on Sunday morning.

He was among the thousands of people walking towards the gunfight site after the news of militants being trapped at Kapren village of Shopian district went viral.

The five hours long gun battle in the Kapren between militants and government forces ended with the death of six militants and an army trooper. While the flame of the gunfight was growing fiery, the youth took to stones to express anger.

Over two dozen civilians were injured during the clashes, in which many received severe injuries. Thirteen among them were shifted to SMHS hospital, Srinagar. 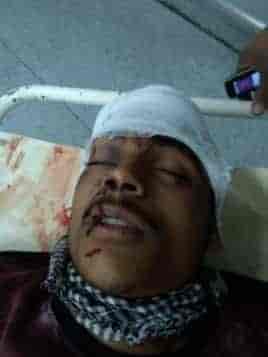 Junaid Ahmad Wani, a cousin of injured Wani, was carrying his shoes in the hands. He sobbed and said, “We were walking to get the dead body of Saifullah (a Hizbul Mujahideen militant), and were about 4 km away from the gunfight site. Government forces blocked the main road and didn’t allow us to move further. Then suddenly clashes erupt and they fired directly at us.”

Soon, the pro-freedom slogans approached nearer as the two ambulances arrived. The emergency section got baffled; the vehicle bought six injured people. Amid slogans and wails, boys accompanying them took them inside the theater in a jiffy. All of them were gone pale and one could hear them humming. Boys shouted for the clear way. Most of them were hit by pellets, while two had severe bullet injuries.

As the trollies rushed toward the theater, the injured were bleeding continuously and seemed dead.

“He asked me to serve the tea quickly and informed me about the encounter going in the Kapren. I pleaded him to not go there. But I don’t know how he somehow reached,” said Nasreen Akhtar, 45, mother of Mehraj Maqbool.

Maqbool is a resident of Batgund, Shopian. Sixteen-year-old got two bullets on his body: one on the right arm and the other on the right side of the ribcage. After doctors treated his wounds, they immediately sent him to the CT scan room for further inspection.

Among the eight patients, who were waiting outside the only CT scan cabin of the district hospital to be treated, Nasreen wailed over her son’s condition, asked her brother, “Raaj soub gasum bachun, poonsi cha Baijana”  (Mehraj should survive, do we have the money, brother?) 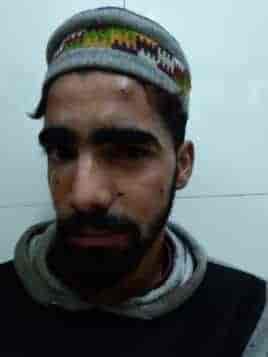 A man told his wife that here conditions are really bad, and they should take his injured mother to some nearby private clinic.

The wails in pain, and grief took over the theater. Javaid Ahmad, 46-year-old,  accompanying his injured nephew, told that amid the chaos in the area, he heard about the incident. His 24-year-old nephew, Aaqib Ahmad Lone, received bullet in his abdomen.

“I rushed towards the spot and I got to know that he was being taken to Srinagar,” said Javaid. “This is what they (India) aim for. They want to kill our generations. Now, he is disabled for the lifetime.”

After brief treatment, his nephew was lying on the trolley, wearing blood-soaked Pheran, waiting outside the X-ray room for his turn. He said in a cracking voice, “When we reached near gunfight site, the army was closing their operation. People raised slogans and they retaliated with undiscriminating bullets and pellets at the crowd.”

After the bullet got him, he crawled a few meters, to stay away from the chaos and called one of his friends and informed him about the incident. “I did not have any stone in my hand, but the government forces directly fired at me,” he said.

He was picked up by some unknown biker who took him to the Shopian hospital. He was later referred to Srinagar.

Outside the operation theater, the relatives and friends were buzzing behind the doctors to know the conditions of injured. 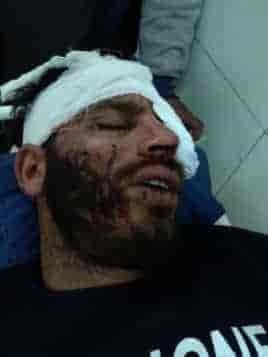 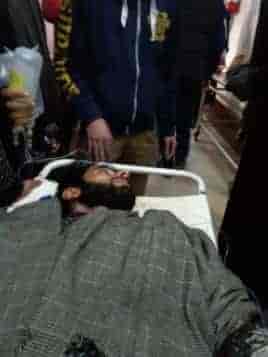 Among the concerned ones was a friend of Aamir Hussain. He hooked doctor by his shirt and asked, “Will he survive? Are his eyes safe?”

In-between the chaos, one more boy, 22-year-old Mubarekh Ahmad Malik, reached the hospital. Pellets got him in the face. Spilled blood colored his face, while his lips were drenched. Screaming in the pain, he asked his friend for water.

He is a resident of Nariso Nadigam area of Shopian district. A young boy, Rafiq Ahmad accompanying him said, “Government forces fired bullets, pellets, and tear gas shells indiscriminately towards the crowd.”

Rafiq Ahmad, an eyewitness to the firing incident told that the army and police force had blocked the main Kapren road, the center between Kulgam and Shopian district. There were also a few class 12 students, going for exams.

A doctor dragged a young boy on the stretcher. A bandage was covering his head and left-eye. His friend, Abid bent over his chest and said, “Wen Kya Karekh Temis Aanee Majei?” (What will you do now for your blind mother?)