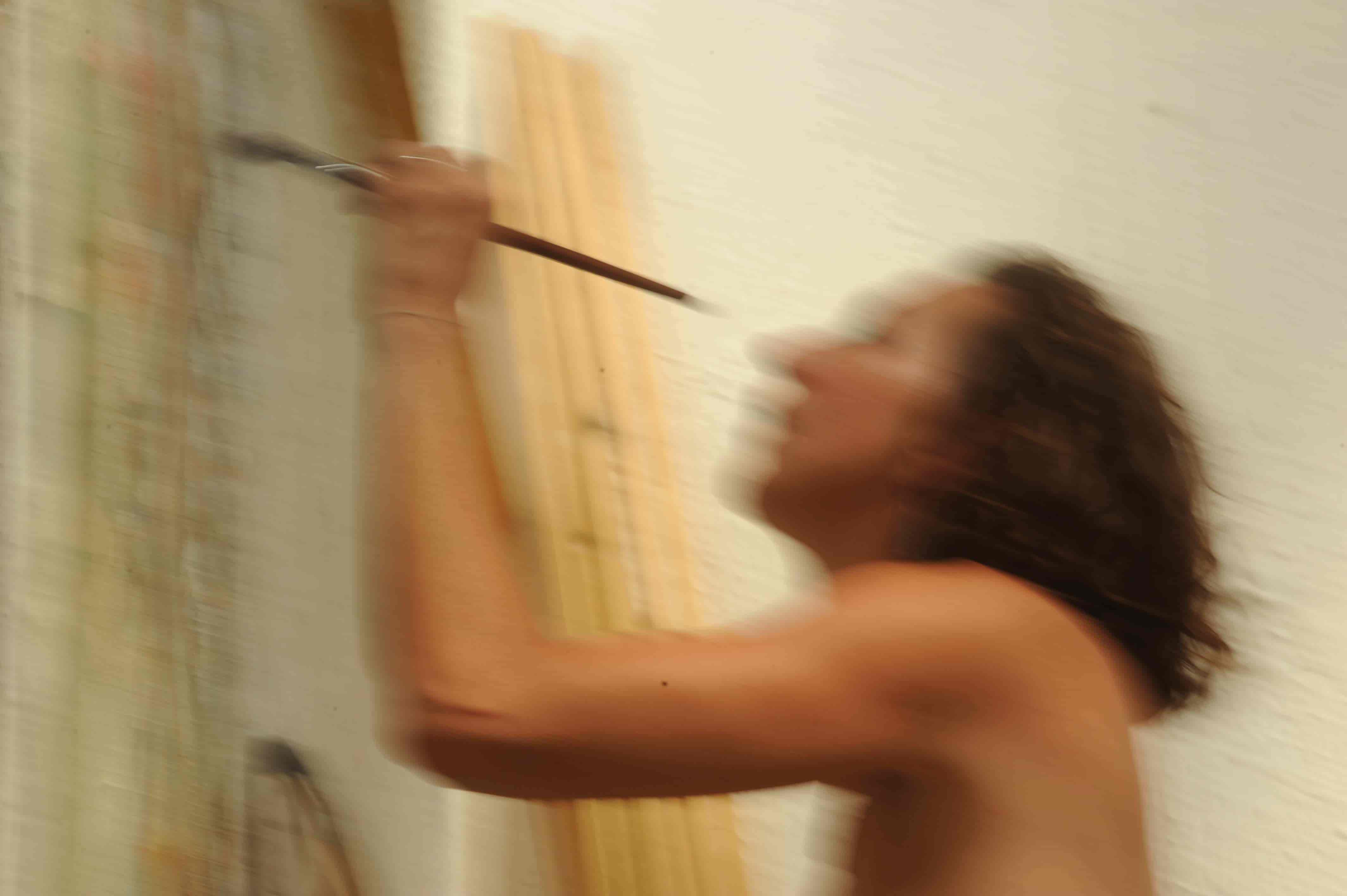 I’m a painter, pelukis, as Malays say in Malaysian.

I recently moved to Malaysia, though I have lived in Italy and France for the last thirty-five years of my life. During my academic time in Fine Arts in Bologna, I began to reflect on the meaning of art in contemporary society. I wanted to discover the dark side, the gap between content and its exploitation, in a system that promotes the latter.

In 1999, I attended a blatantly rigged painting competition, where the winners were those who had no interest in the meaning and reflection of contemporary art but rather the fame and success that can be associated with it. Knowing directly what concerned those who ran the competition, they easily found support in this corrupt system of empty values.

There were numerous regulations for the competition, which involved painting on the spot for three days with guards and pads at the entrance to ensure only the jury decided the two winners. But with the support of some professors/politicians, the work of the winners/flatterers-of-the-above arrived on the last day: a painting already exhibited elsewhere and photographic work of one artist’s girlfriend. Here were the winners, to the great surprise of many participants in the contest.

This is a small-scale, trivial story but unfortunately one that says a lot about the operation of seduction and power that runs the world of art, like the rest of the world in general.

Efforts to bring justice for the outcome of the competition, through a public petition, went mostly unheard or were mocked by the organisers and judges. Losing faith in the system there, I left Italy for France, to settle in Marseille.

This proved to be another challenge, given that the city I chose is not an easy place to settle and start anew. It is culturally, economically, and socially varied, rich with a mixture of nationalities and socio-economic circumstances. However, I found it to have more breathing space, as it seemed to be a system more inclined to art, artists, and to the messages they carried through their work. This breathing space was due to the appreciation of a difficult local economic and social situation that existed there, creating an art scene that was more socially vibrant and closer to a real life of sacrifice and struggle than in Italy. There was hope in the mutual help that exists in the artistic community and a unity against the ruthless speculative market. The art scene in Marseille was a sort of microcosm of its society.

But even there, as I spent more time and became more intertwined with the community, I began to realize – as I was watching the absurd art trends at the internationally recognised exhibitions going through Dubai and the U.S.A. – that there are many cases where what matters most is what is marketable, not quality, talent, or content. It appeared that even in the Art community, we had discovered how to turn lead into gold in the modern era! Art was becoming another form of consumerism, like a clothing label, and an emptiness of artistic intelligence was valued if the item was marketable.

Only recently, a particular photographic exhibition of works at the Venice Biennale, whose ability to capture the general public’s interest has led to it becoming an on-going exhibition, has provided further evidence that we are in a system that values and admires aestheticization at the expense of reflection. In the exhibition are beautiful images that reflect sad scenes of various war zones, where we are shown lands and people devastated by war through striking colours of red instead of green. What the artists are doing is celebrating the beauty of the destruction and massacres happening around the globe and aestheticizing them to the extreme. This art is made only to be beautiful in the chic and posh areas, in decent living rooms, making this art system now empty of meaning. We are in the culture of the spectacular, and the impact of destruction and human devastation has shock value, and it sells well.

To what place does the public have access that can have art on display that raises disturbing questions about current society? Who can put us in front of the viewer for critical analysis and not for continuous self-satisfaction? Who will display art useful to society, art that aims to advance humanity rather than make us stupid to the core of our being?

This society, based on competition and the importance of being socially and economically successful, has a tendency to celebrate artists who are ready to do everything to be in the spotlight and a tendency to close the door on those who are willing to look at things and reflective, artists working with a functioning brain, not a dollar-driven thought-system. Luckily, interesting artists still exist they are just harder to find.

During the era of President Berlusconi in Italy, there was a return to a sort of state-art. For the remainder of artists, there was no exhibition space, only the emigration of brains toward state-art. In truth, all of my artist friends have left the country, or almost all.

Having returned to Asia, I am learning, seeing the artist community and cultural relevance of artists’ contributions, but I do not yet know well enough to make an analysis. With time I will see more. However, my first impression is that of an energy increasing, in parallel with the economy, which is leading society to contemporary art. On the one hand, there is a need to be open to new ideas and to confront the West as equals, and on the other, to challenge the concept and status of the elite. Among Asian artists, I found a creative energy that we in the West have lost, accompanied of course by the natural need to earn by selling their labour of creative challenging art.

Last year, I was in an artists’ residency in Yogyakarta, in Java, Indonesia, where I had the pleasure of discovering a strong and healthy interaction among the artists there, concerning a way to move forward together for a common cause: that of art! Sadly though, it seems to me that they are starting to adopt here – and especially the richest countries like Malaysia and Singapore – the same system that is choking art in the Western world, but I have hope that they will propose a new critical attitude, once freed from the incessant confrontation with the West and the harmful residues of colonialism.

The world, not just the art world, has upon it an urgent need to open its eyes to reality and not to believe the various media manipulations of a reality that is poorly digested by one and all. Is this not the primary function of art? Or am I wrong? Or has art become a system, just as any other, to do business?

The confessions of an Indian beef-eater

A tourist in Kashmir