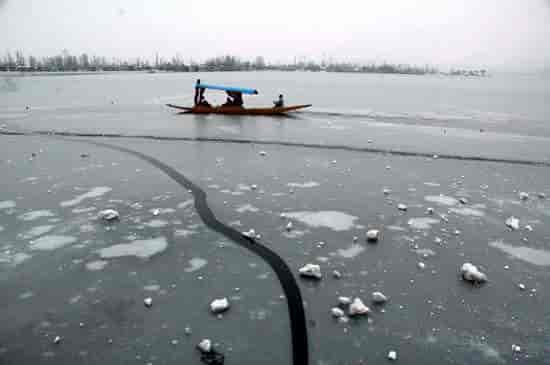 Despite the fact that state authorities here are spending more than crore rupees every month for protection of Dal Lake, its area is shrinking everyday becoming a cause of concern.

Under another scheme under the umbrella of the state sector called MH4217 and the amount spent in 2014 on the protection of Dal by this scheme was 578 lakhs.

Through Prime Minister’s reconstruction program called PMRP, the state government claims to have spent two crore rupees in just one year alone. The state authorities claim that they have spent this amount on acquisition of land within Dal.

As the illegal constructions see no end around this world famous lake, the government claims that it has spent 1.5 crores on rehabilitation and resettlement of people living around the lake.

In a similar fashion 2.72 crores have been used over what the government earlier claimed de-weeding and cleaning of channels around the lake. 1.65 crore was shown as an expenditure incurred upon administrative affairs.

133.57 lakhs have been spent under Urban Local grant in the year 2014 by the state authorities.  1.32 crores were given away as the salaries for the staff while as the remaining amount was shown as the expenditure upon the telephone bills of babus.

Ironically and shocking for many, the depth of Dal lake is now reduced to an average depth of 4.5 feet (1.2 metres) only while as 50 years earlier it was more than 45 feet.

The surrounding area of the lake was 15,961 kanals five decades before but nowhas shrunk into a meagre space.

The urban lake, which is the second largest in the state, is integral to tourism and recreation in Kashmir and is named the “Jewel in the crown of Kashmir” or “Srinagar’s Jewel”. The lake is also an important source for commercial operations in fishing and water plant harvesting.

The shore line of the lake, is about 15.5 kilometres (9.6 mi), is encompassed by a boulevard lined with Mughal era gardens, parks, houseboats and hotels. Scenic views of the lake can be witnessed from the shore line Mughal gardens, such as Shalimar Bagh and Nishat Bagh built during the reign of Mughal Emperor Jahangirand from houseboats cruising along the lake in the colorful shikaras.