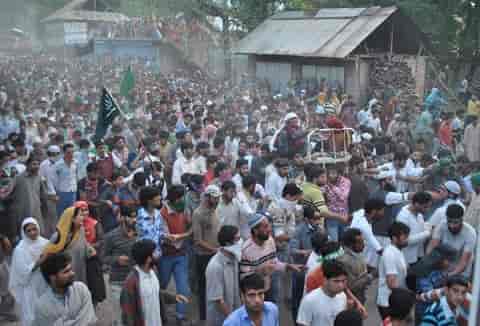 Three years ago, at least 17 protesters were killed and more than 100 people were injured on September 13, 2010 (Monday) in police and paramilitary forces’ action in Indian-controlled Kashmir’s north, south and central parts.

Kashmiri people were protesting against the alleged desecration of the Quran in the United States that year.

On that day, people in every nook and corner protested against the action of a ‘mentally retarded’ priest who had reportedly desecrated the Quran in the United States of America.

At least seven persons including district president JKLF (R) Showkat Ahmad Mir and a woman were killed in violent clashes in Budgam while over 60 people were injured 23 of them critically. The victims were identified Javaid Ahmad, Nissar Ahmad Kuchay, 22, Ghulam Rasool Ahanger—all residents of Humhama while a woman Rafeeqa, was from Ompora Budgam.

A class 7 student, Danish Nabi son of Ghulam Nabi Kumar, of Charar-i-Sharief was killed in CRPF firing at a group of youth who had  engaged the paramilitary troopers in clashes near Hanwari in Char town. At main town Budgam, a policeman identified as Ravinder Singh, was killed on that day.

Four persons were killed and at least 100 injured when police and CRPF men opened fire and resorted to intense teargas shelling on the protestors in Tangmarg.

The deceased were identified as Riyaz Ahmad Shiekh  son of Ghulam Muhammad Shiekh (28 ) of Tengan, Pampore, Ajaz Ahmad Wagay,(26) of Kadalbal and Javaid Ahmad Rather of Kadalbal. At least 20 persons sustained bullet injuries.

A 14 year boy was killed and two others injured after the forces and police resorted to unprovoked’ firing in Islamabad.

Atleast five people were  killed and 65 others injured, when police and the CRPF personals opened fire on the protesters in the Tangmarg area of north Kashmir.The deceased were identified as Mudassir Ahmad Parrey son of Ghulam Rasool Parrey resident of Krishama Tangmarg, Tariq Ahmad Ganaie resident of Tillegam and Qayoom Ahmad Wani of Waniloo Tangmarg, Iqbal Ahmad Malik s/o Bashir Ahmad Malik of Tumberhama village. Out of the 65 injured, 55 had bullet injuries.

One person, Nissar Ahmad Bhat (22) was killed and three others were injured when personnel of Border Security Force (BSF) allegedly opened fire on peaceful protesters in Ajas township of Bandipora on that fateful day.

Then DG police had blamed Hurriyat for the violence. (CNS)