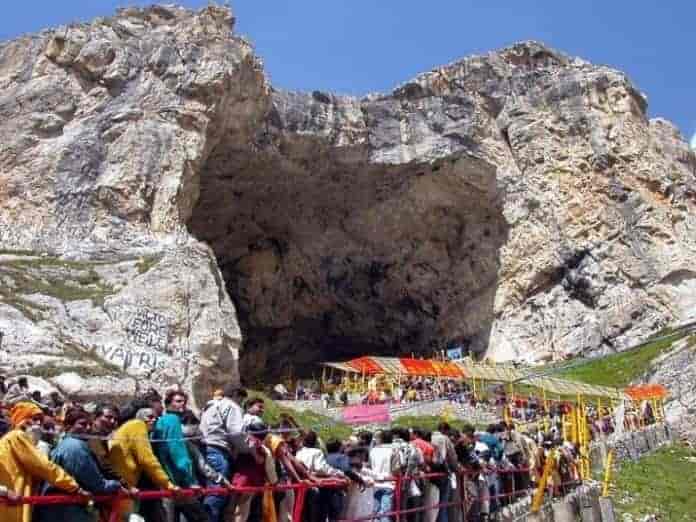 A fresh batch of over 1,200 pilgrims, including 300 women and 100 sadhus, left the base camp here for the cave-shrine of Amarnath in south Kashmir today, officials said, PTI reported.

They said a minor landslide, triggered by overnight rains, struck the Jammu-Srinagar highway near Jaswal bridge in Ramban district early in the day, but was immediately cleared by the concerned agencies.

The convoy of 42 light-and-heavy vehicles carrying 1,208 pilgrims was progressing smoothly after leaving from the Bhagwati Nagar base camp, the officials said, adding that they were expected to reach the twin base camps of Nunwan along the traditional 36-km Pahalgam route and Baltal base camp later in the day.

Among the latest batch, they said 773 pilgrims have opted for the Pahalgam track in Anantnag district, while 435 including were going from the shorter 12-km Baltal side in Ganderbal district.

The arrival of the pilgrims from across the country has recorded a marked dip over the past week. Considering the progressive decline in the strength of the pilgrimage, Jammu and Kashmir Governor N N Vohra, who is also the chairman of the Shri Amarnathji Shrine Board (SASB) that manages the yatra, would be taking a meeting in the coming days, an official spokesperson was quoted as saying by PTI.

He said the meeting, also involving officials of all security forces, would discuss various things regarding the management of the pilgrimage during the remaining period of the yatra.

The 60-day yatra, commenced from the twin routes of Pahalgam and Baltal on June 28, is scheduled to conclude on August 26, coinciding with the Raksha Bandhan festival. Till last evening, a total of 2,36,157 pilgrims had the darshan of the naturally formed ice-Shiv Lingam at the 3,880-metre cave-shrine.